Rules and Etiquette for riding in groups 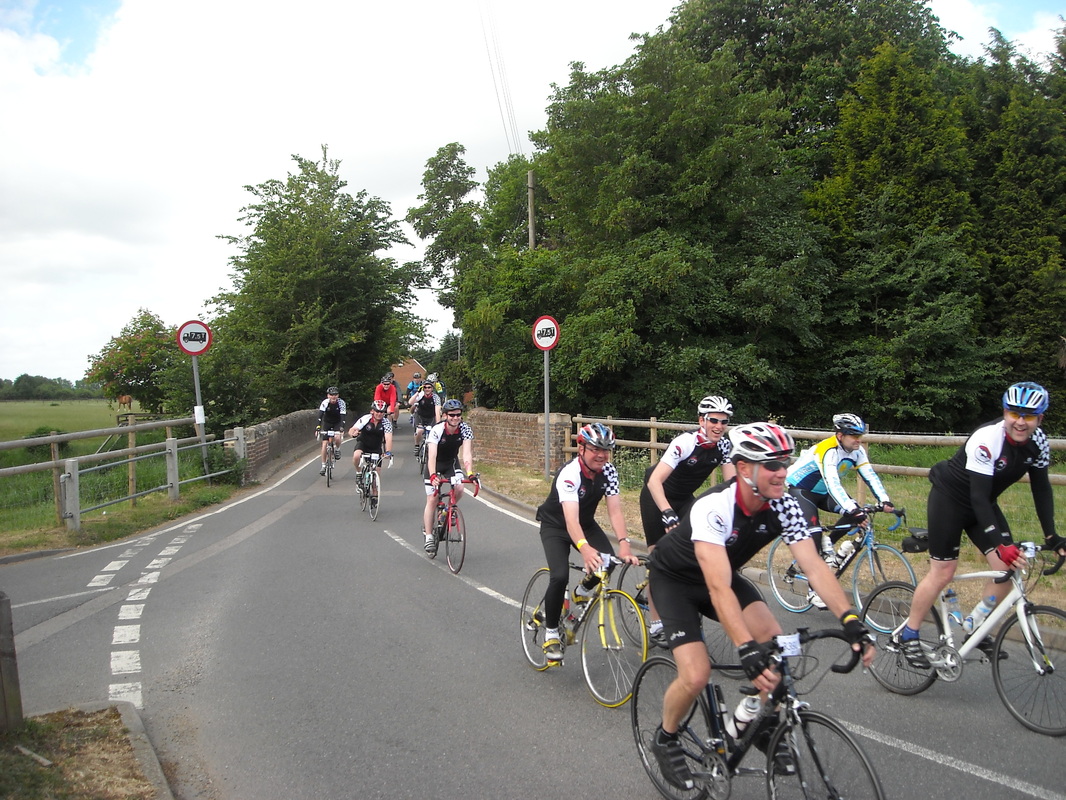 A typical group riding in perfect formation. Note that some of the group are cycling on the wrong side of the road, and others aren't even looking straight ahead; classy stuff!
The Club, which was founded in 2010, cycles sometimes. We have an enviable reputation for staying in the pub late and all round raucousness. The rules and advice incorporate long standing practices and will be familiar to all experienced riders. Whilst they have been drawn up to help members who have never ridden in a group we would like everyone to make a point of reading and following them.

All riders take part in the group runs at their own risk. Those risks can never be totally eliminated but can be minimised by following these rules to the letter – no exceptions.

Ride officers have been appointed and are there to enforce these rules and dish out the appropriate punishment. We aren’t at liberty to say who they are but they are watching you. If they believe that a rider’s conduct is unacceptable they have the authority to exclude the offender from the group run and will subsequently report the circumstances to the committee who will take further action; usually a good rummaging and a long fumble from one of the senior officers.

Warning Calls when Riding in a Group. These calls and signals are universal to ALL experienced cyclists in all countries; please use them at appropriate times

There is a vehicle coming up behind the group

There is a vehicle approaching towards the front of the group

This call lets following riders know at junctions, when the group is joining or crossing another road, whether or not the road is still clear or “sort of” clear or “clear if you are quick enough”. If the group cannot stay together the first ones across ride slowly until the others catch up or if not, just bomb off and we’ll see you when we see you.

“Pothole” or “hole” or “Jesus Christ what the hell was that”

Any pothole that could cause a rider to fall, injure themselves or the bike. It is possible to indicate where it is so that you can ensure following riders can steer into it and do worse damage than you. Do this by either pointing or adding to the call “on the left (or right).” E.g. “there was a pothole in the road back there about half a mile ago on the left. I wonder who hit it?”

This is to alert Colin that a hill is coming up. He is likely to swear, gesticulate and bemoan the fact that he even bothered coming, just ignore him, fat people do that sort of thing all the time. Not to be confused with Dr Mark who is also a Hill.

A general warning of some kind of hazard; usually parked cars, underwear or pedestrians. For hazards on the left an alternative warning is to put your left hand behind your back, pointing to the right, away from the hazard extending your middle finger.

This is to let everyone know that Neal will be passing and then slowing down immediately so be prepared to pass him again almost instantly.

Serious mechanical failure but Trevor has shrugged his shoulders and carried on without you; leaving you without any means of contacting another soul and crying at the side of the road.

“Stopping” and “Slowing” or “stop”, “stooooooooooooop”

Let the others know and they will wait while you repair it. It is important that you all stand around laughing at the rider misfortune and offer advice, especially at the point when they do not need it. If it is taking too long simply wrestle it off them as we all know we can do it much quicker than they can. Remember, why have one man person do it when three can take five times longer.

Make sure that both the horse and rider are aware of your presence and if you are approaching from behind shout “hello horsey” or make a puffing noise like a Goat with emphysema “hrrwwwphhaaawww”. Alternatively you can shout “get that stupid animal out of my way’” both are very effective.

The Big Steve shout is required if you want to clear the road of other users. He will simply ride on the opposite carriageway until all vehicles have been scared onto the verges or crash. This shout can also be used when it’s really windy and you need someone to cycle behind.

If you have no idea where you are, where you are going or when you are going to get there it’s reassuring to tell all other riders that it’s only 5 miles away. This can be demoralising at the very start of a ride or if you are Tym with a Y.

SM Harrison will instantly demonstrate how to stop without removing your feet from the cleats.

No it’s not a real vampire (I think), it’s Darren; you may have met him if you cycled at night on a Wednesday or lived in a garage for three months.

Let others know if you are unable to keep up, we won’t do anything, it’s just handy to know once we are at the hotel and we can say - does anyone know where (insert name(s) here) is? Who cares, let’s get the beers in.

Ride erratically. Keep an ever increasing and decreasing line at varying speeds while in a group. Any sudden change to a straight line and a constant speed is magnified as it reaches riders at the back and so can have dramatic consequences.

Ride two, three or even four abreast where you can.  Overlap either forwards or sideways; if the rider in front swerves or falls, don’t worry about it, they are now “moultened” they will pick themselves up at some point and catch up.

When approaching a hill, get off immediately and assess the situation, if it looks too hard then start walking or hail the van and get a lift. Remember there’s no ero in Hero.

Treat members of the group and other road users with courtesy. Acknowledge with a wave or gesticulation where necessary. If they get really out of order bang on their car and “offer them out”. Some handy Spanish phrases for local road users

Remember, be safe, be seen and above all, abide by the code or you will find yourself in a Ride Officer sandwich.